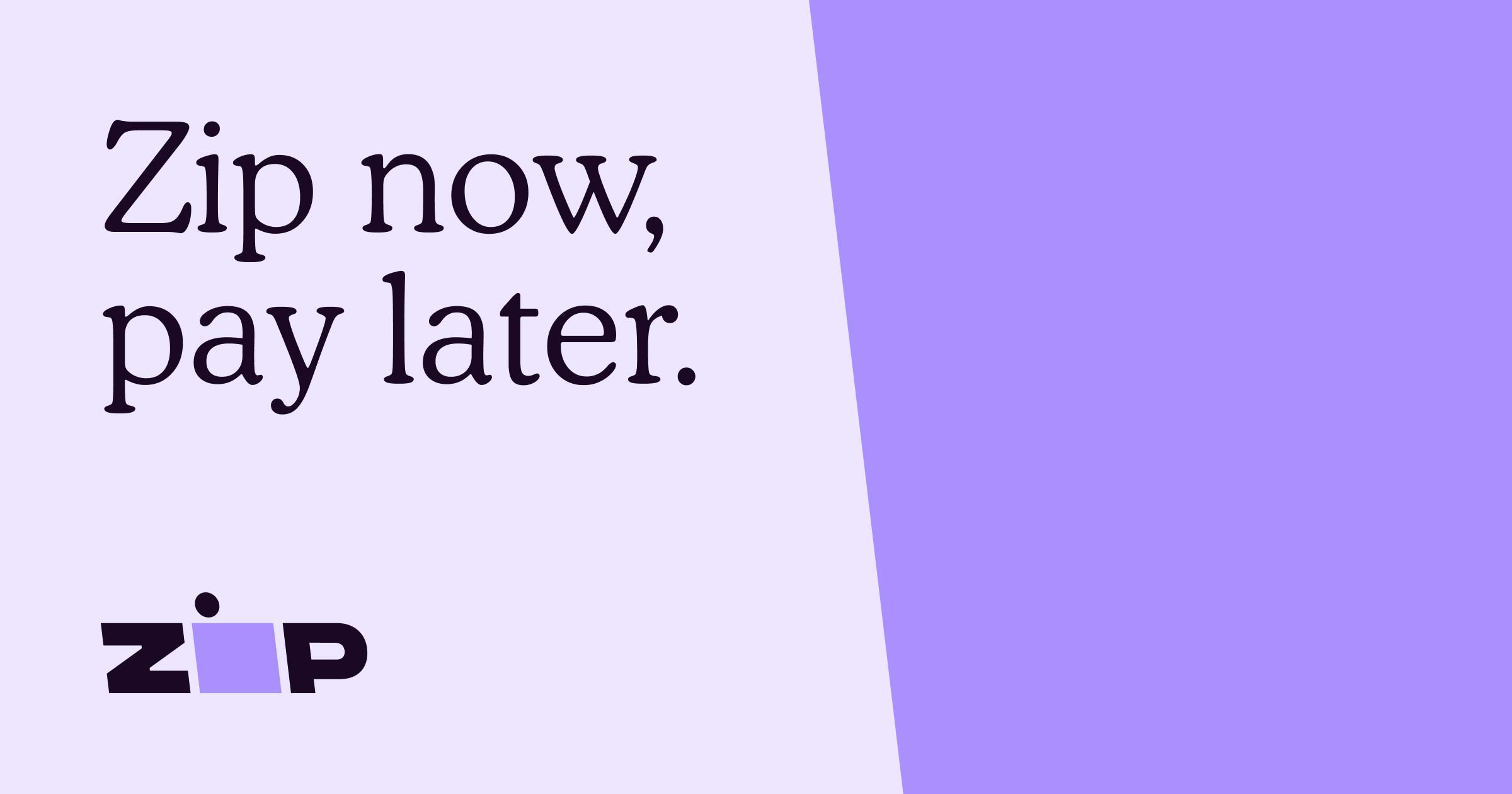 NEW YORK (June 1, 2020) – High-growth, US-based payment installment platform, QuadPay, has partnered with Australian publicly traded buy now, pay later (BNPL) pioneer, Zip Co (ASX:Z1P), to create a $1bn+ global payments company. The deal will continue to significantly grow the North American BNPL market and expands the group’s reach to more than 3.5 million customers and 26,000 merchant partners worldwide. It is backed up with $130m of capital, via convertible notes and warrants issued to prominent growth investor, Heights Capital Management, an affiliate of the US-based Susquehanna International Group (SIG), which will be used to accelerate domestic and global expansion. SIG has also made investments in Bytedance (parent company of TikTok), Credit Karma and Fundera.

Founded in 2017, QuadPay was an early entrant into the US BNPL market and has since seen rapid growth, with customer numbers increasing by 33% in the last quarter alone. QuadPay’s 1.5m customers are able to pay in installments across more than 3,500 integrated merchants, including leading brands like Fashion Nova, Ugg, HYPEBEAST and For Love & Lemons.

US market ready for credit disruption

The market opportunity for BNPL in the US is one of the largest in the world and the deal positions QuadPay strongly to seize this opportunity. While BNPL is still in its infancy in America, the move to alternative payments is expected to be rapid, mirroring growth in other parts of the world. Lockdown restrictions brought about by COVID-19 have further accelerated the growth of BNPL as shopping migrates online.

By 2023, BNPL is expected to account for 17 percent of the global commerce market.

Trading as a public company enables the combined entity to access capital markets quickly and efficiently to support QuadPay’s ever-growing merchant base and transaction volumes, while providing further opportunity for:

QuadPay has a unique and differentiated model within the US BNPL market, offering merchants the most seamless and simple integration online and in-store, as well as a direct-to-consumer payment installment product through its market-leading app.

The combined force of QuadPay and Zip and additional resources announced today will provide a wealth of new opportunities for merchants, driving the uptake of new customers and expanding the US BNPL market.

Merchants that already accept Visa can offer QuadPay at the physical point-of-sale instantly and at scale, without needing to write a single line of code or modify their POS systems. Its online virtual checkout technology enables eCommerce websites to add QuadPay in a few lines of front-end code without requiring any API integrations or modifications to financial settlement, reconciliation or refunds processes. So, whether merchants are online-only, have one store, or one thousand, they can deploy QuadPay and see results quicker than with any other BNPL solution.

QuadPay merchants are experiencing an uplift of up to 25% in conversion rates and between 20% and 60% lift in average order value almost overnight. Forty percent of consumers say they are more likely to complete a transaction if BNPL is offered at checkout.

BNPL to become as ubiquitous as “free shipping”

QuadPay’s consumer-centric approach to innovation has resulted in strong customer advocacy (4.8 App Store rating) for its market-leading app, which has had more than 1.2 million downloads.

While QuadPay has some of the highest customer approval rates in the US market, it is firmly committed to responsible lending. Both QuadPay and Zip have financial responsibility in their DNA. Proprietary credit assessment processes and algorithms, underpinned by multi-factor ID verification have driven strong and continually improving credit performance, even during the recent economic period.

QuadPay Co-CEO and Co-Founder, Adam Ezra said: “Consumers are increasingly avoiding credit cards and gravitating to flexible BNPL options instead. Installment payment options are transparent, convenient, and give consumers greater control over their finances – they’ll soon become an expected component of the online shopping experience, as common as free shipping. We’re incredibly excited to be riding the wave of change and offering a product that is friendlier to the consumer than high-interest-bearing credit cards and digitized versions of traditional credit. We look forward to continuing the reinvention of payments for consumers and retailers in partnership with Zip.”

Brad Lindenberg, QuadPay Co-CEO and Co-Founder, said: “We are to our competitors what Stripe was to PayPal. While there are already some big names in the market, QuadPay is by far the most technically advanced. Our technology means that merchants as large as Target or Walmart could roll out QuadPay online in a couple of days. No other installment provider offers this speed of integration and becoming part of the Zip family will provide QuadPay with access to public capital markets to support our ever growing merchant base and transaction volumes.”

The combined company will employ more than 400 people in five locations across the US, Australia, United Kingdom, New Zealand and South Africa. Both QuadPay founders remain with the business, and are focused on driving growth in North America, scaling a business that unifies both companies’ cultural values.

Zip CEO and Managing Director, Larry Diamond said: “Adam and Brad are proven entrepreneurs with a great product and high-growth business, so it’s great to welcome them and the QuadPay team to the Zip family. Together, we are united in a shared vision of disrupting the outdated credit card sector with digital, fairer alternatives. QuadPay’s market-leading virtual card offering was one of the first to launch in its category, and the company has an unrivalled track record on customer innovation and delivering an exceptional experience for merchants. We look forward to the exciting road ahead.”

About the QuadPay founders:

Adam Ezra’s background is in consumer retail, finance, debt and marketing. He has co-founded multiple businesses, including Fashionata, an apparel group specializing in the building of proprietary apparel brands and the distribution of leading global lingerie and outerwear brands in Australia and New Zealand. Ezra also has experience in private equity, investment banking and corporate advisory, through both Illyria and Macquarie Group.

Brad Lindenberg is a seasoned technology entrepreneur with multiple successful exits in the payments, eCommerce and media sectors. These include CalReply, the world’s leading mobile calendar marketing platform with over 4 million users worldwide, which was acquired by ROKT (a $100 million revenue digital referral marketing company) in 2017.

Launched in 2017 by founders Brad Lindenberg and Adam Ezra and headquartered in New York City, QuadPay is a leading, high-growth U.S. installment provider that is disrupting the traditional credit card industry. QuadPay’s mission is to give savvy shoppers more freedom and flexibility with the option to pay in four interest-free installments over six weeks.

Driven by a strong focus on innovation and customer-centricity, the company has developed a market-leading app with 1.2 million downloads and was among the first in the US market to launch virtual card technology. This enables seamless integration for merchants while allowing its 1.5 million customers to shop online and in-store, not just with QuadPay’s 3,500 integrated merchants, but with leading global retailers.

ASX-listed Zip Co Limited (Z1P: ASX) or (“Zip”) is a leading player in the digital retail finance and payments industry. The company offers point-of-sale credit and digital payment services to the retail, home, health, automotive and travel industries. Zip has operations across Australia, New Zealand, the USA and United Kingdom, with associates in South Africa. Zip also owns Pocketbook, a leading personal financial management tool and SME lending provider Spotcap. The company is focused on offering transparent, responsible and fairly priced consumer and SME products. Zip’s platform is entirely digital and leverages big data in its proprietary fraud and credit-decisioning technology to deliver real-time consumer responses. Zip is managed by a team with over 100 years’ experience in retail finance and payments and is a licensed and regulated credit provider.

Zip was advised by:

QuadPay is advised by: